Elvis has left the galaxy 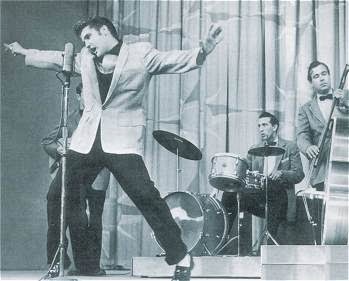 In the City of Ottawa in Canada there is an organization called The Elvis Sightings Society.

The three founding members set up the society in 1989 as they believed that 'contrary to popular opinion (and petty details such as police and coroners' reports) the King was very much alive'. 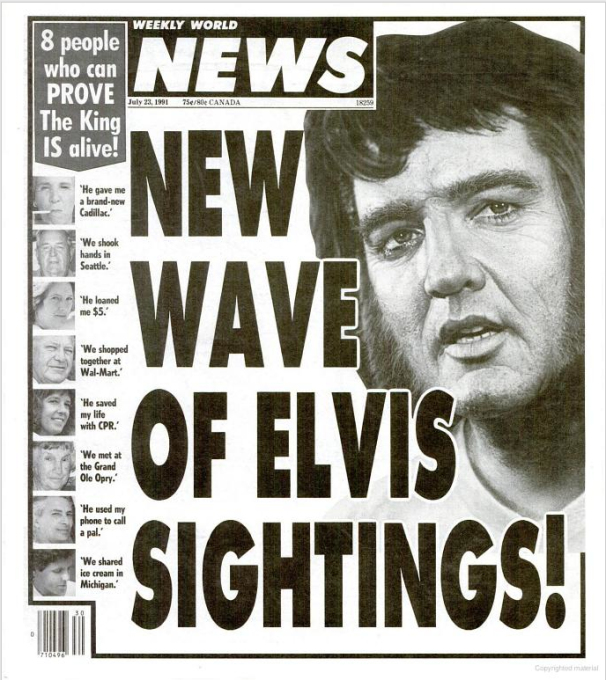 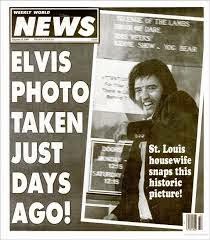 Of course, sightings of Elvis have been made around the world since his untimely 'death' in 1977. But all were either deluded, fraudulent or genuine cases of mistaken identity.

Because we can now exclusively reveal that Elvis was in fact abducted by aliens from a nearby galaxy and taken to a planet where he now works as a waiter in a downtown restaurant.

Elvis is content in his new life, the more so as the aliens are all generous tippers, and he hopes to rise to the position of head waiter before too long.

Acknowledgement: Details on Elvis Sightings Society from their website

Email ThisBlogThis!Share to TwitterShare to FacebookShare to Pinterest
Labels: Elvis has left the galaxy, Elvis sightings

The day the World's Biggest Diamond was found


On a sunny day in January 1905 Thomas Powell made his regular descent down the Big Hole diamond mine in South Africa.

Little is known about this humble employee of Premier Diamond Mining Company. But what is known is that on that January day he emerged from the mine brandishing the largest diamond ever to be ripped from the bowels of the Earth. A diamond so large that it filled his entire hand and weighed in at an astonished 621 grams.

Thomas took his trophy to his foreman Frederick Wells. Frederick took it to the mine owner Thomas Cullinan. Thomas C. took it to an expert for confirmation that it was indeed what he thought it was. The expert took it... No, the expert didn't take it anywhere. But he confirmed that it was definitely a diamond. And then the terrible question arose - What shall to do with it?

After two years a buyer for the world's largest diamond emerged in the shape of the South African government. The politicians in Pretoria had decided that it would be a nice present for the English monarch King Edward VII on the occasion of his sixty-sixth birthday. And so the diamond was purchased for the sum of $150,000 and then sent across the seas to England.

The almighty diamond was presented to the king on 9 November 1907. And he was ecstatic! But that same terrible question once again arose - What shall we do with it? The decision was taken to have it cut into several stones and to use them to adorn the Crown Jewels in the Tower of London.

The job of cutting up the world's largest diamond was entrusted to Joseph Asscher of Amsterdam. Legend has it that he had a doctor in attendance in case his made a fateful error during the cutting and had a heart attack. He completed his work several months later when 9 large stones and 105 little pebbles were delivered to the king.

Dawn rose majestically over the golf course, hitched up her skirt and headed for the club house. She glanced at the luminous dial on her watch. Two-thirty in the morning.   What was she doing at this unearthly hour? Fleeing from her demons? Or was it fate had brought her to this place at this ungodly hour? She glanced up at the stars, but they gave nothing away. O, my aching heart! she screamed aloud. Her heart? She could hear it - boom! boom! - pounding inside her chest. But was it truly her heart she could feel and not her merciless soul deriding her for her inconsequential existence? My life, she thought, an unstamped letter lost and abandoned in life’s sorting office. If he wanted to leave why didn’t he just leave? Go back to his wife and his brats if that’s what he wanted. Why did he have to prostrate himself over the railway line and wait for the night express to tear him asunder? Her soul convulsed at the thought of it and she tried to shield herself from the feelings that were ripping her in half like a chain saw through a giant oak tree. I have my life before me! she heard herself scream just before she crumpled into a heap on the grass and listened again to her pitiless heart repeating its terrible litany.

For several moments she lay prostrate and then dragged her weary body to its feet once more. She struggled forward and it was like she were feeling her way through a swamp. If only her head would clear, she thought. If only my head would clear, she said aloud, as she fumbled forward to the club house door. It was here she worked and here that she first met Boris. O, that awful, magnificent, terrible day! Was it destiny had brought them together? Was there some fateful event at work of which they were ignorant of the machinations and of the consequences? She collapsed in front of the club house door and beat it plaintively with her fist and pleaded Why me? O, ye heavenly ministers, why me? And then her heavy eyes closed and she fell into a slumber.

Two hours later, as the sun, its golden helmet shimmering in its brow, was scaling the wall of the glittering east, she roused herself from her slumber and clambered to her feet. Her head was heavy and hazy, and through the mist she could see the distinctive and unhappy figure of her father. Her father? Had she dreamed him alive while she slept, or what was it had disturbed his lost memory that now rose up inside her? Lost memory? No, it was never that, she could never forget her father, never forget cowering in a cupboard while he rampaged in a drunken rage around the house, never forget how he would take his anger out on any being that crossed his path, never forget his cussing and swearing as he tried to disentangle his own demons that were to torment him into an early grave. But was she not like her father in her savage loving of Boris? Was it not this that pushed him to that fateful, final act? I am my father’s child, she said aloud, and sank pitifully to her knees. Then she raised her arms imploringly to the heavens, and then beat her chest in a woeful and pitiful contrition.

Somehow, she would never know how, she made her way to her home and her tiny room, took a tin out from the cupboard, poured its contents into a small saucepan, and now sat nursing in her tiny hands a bowl of celery soup. She sipped the celery soup with a seductive celerity as though it were her last meal. Through the tiny window she could see raindrops forming on the glass and beyond them grey storm clouds sweeping in from the horizon. O, ye fates! Why are ye conspiring thus to bedevil me? She finished the soup and placed the bowl on a small table at the side of the chair. She looked at the ceiling, then at the wall, then at a floor, then raised her hands and cried: Oh, Boris, Boris, Boris! 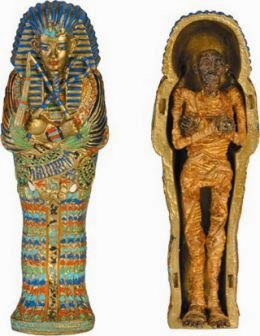 It was the Pharaohs of Ancient Egypt that started the fashion. To vanquish the ravages of Time and rend themselves Immortal, they decreed that their mortal remains be embalmed and then wrapped in strips of linen, a process known as mummification.

Centuries later the practice was back in fashion, this time using a process of cryogenics whereby the body of the defunct is frozen at an ultra-cold temperature in the hope that one day science will be able to once more restore the subject to life.

The first person to be frozen this way was Dr James Bedford, a psychology professor at the University of California.

His rise to Immortality  began in 1965 and was sparked by an advertisement of the Life Extension Society (LES) looking for volunteers for a new technique of cryogenics that the organisation was pioneering.

Dr Bedford duly presented himself as a candidate for the exciting new experiment, and on 12 January 1967 became LES's and the world's first frozen mummy. 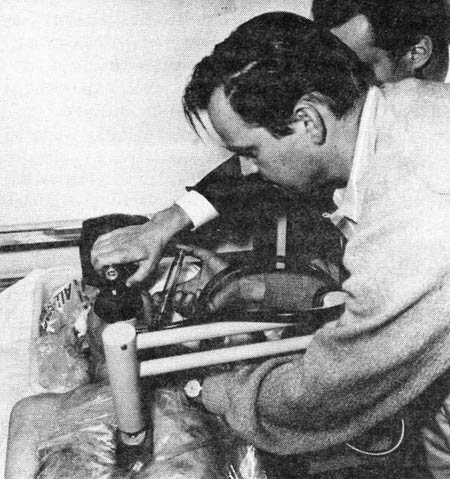 The first stage of the process was to remove all blood from the body and replace it with a fluid aimed at suppressing the crystalisation of the body's cells. The body was then frozen to a temperature of minus 200 degrees Celsius, and placed in a hermetically sealed container. And then the long wait began.

Dr Bedford's frozen body was initially housed in the garage of a certain Dr Robert Prehoda, but Dr Prehoda's wife was so panic stricken each time she went to the garage to get into her car, that it was decided to find a more suitable location. It currently resides in Arizona.

James Bedford is still awaiting his resurrection, and until the day arrives January 12th of each year is celebrated as Bedford Day.