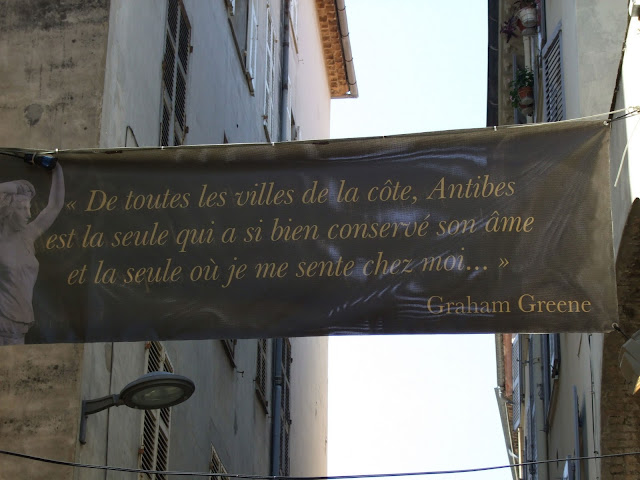 Graham Greene (1904-1991) was one of the most celebrated and successful writers of the twentieth century. He began his long career as a novelist in 1929, his many books including Brighton Rock (1938), The Third Man (1949), The Honorary Consul (1973). In the 1960s he was so famous that a man was going around Europe pretending to be him. To his many admirers he inhabited a world known simply as Greene-land.
So anyway, in June 2008 I was in Antibes in the south of France, where Graham Greene lived for many years from 1966, and decided I would like to see the apartment block where he lived, and what better place to enquire its whereabouts that the main tourist office.
One of the assistants was wearing a Union Jack lapel badge, so I went over and asked her if she could tell me the location of Graham Greene’s residence in Antibes.
“Who?” she asked me with a puzzled voice.
“Graham Greene”, I said.
She asked me to repeat it.
“Graham Greene”, I repeated.
She asked me to write it down.
I wrote it down.
She read the name aloud, couldn’t pronounce Graham. “Graa-ham”, she said. She asked me who he was.
“An English novelist who lived in Antibes”, I told her.
She was still puzzled. She asked a colleague. He thought that he’d heard the name but couldn’t be sure. She telephoned someone, again couldn’t pronounce Graham. She waited. I waited. Then she wrote something down and hung up the phone.
She copied her notes onto a piece of paper and gave it to me. It was the address of Graham Greene’s house. She’d written his surname without the ‘e’ - Green. She told me there was a plaque on the wall with Graa-ham Green’s name on it.
I found the address that she’d given me and saw the plaque. I wanted to scrawl on the wall in 10 feet high graffiti: GRAHAM GREENE LIVED HERE - OK? But instead I just took a photo and then went to look at Antibes.


On my way I came across a street with a large banner stretched across it. On the banner was a quote from - guess who? - Graham Greene. It said that Antibes was the only place on the Côte which had retained its spirit and the only one in which he felt at home.

I agreed. It had a kind of understated charm, in contrast to its flashy neighbour Cannes. There was nothing outstanding to look at, its attraction more its entirety than the parts that made it up. It was a place to just go and hang out. Nice cafés in quiet spots to sit with your café crème or glass of beer and watch the people go past. And who knows, maybe or two of them may even have heard of Graa-ham Green. But it’s not certain.