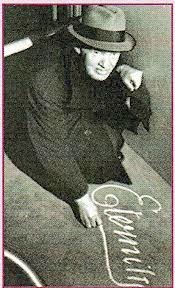 "...I felt a powerful call from the Lord to write 'ETERNITY'. I had a piece of chalk in my pocket and I bent down there and wrote it". - Arthur Stace.

Arthur Stace was a graffiti writer with a message.

His message consisted of just one word:

Over a period of 35 years he wrote the word 500,000 times around the streets of Sydney (Australia), and if apprehended by the police would tell them he had"permission from a higher source".

His mission began on 14 November 1932 when he heard an evangelist preacher John G. Ridley telling his congregation:

"Eternity, Eternity, I wish I could sound or shout that word in the streets of Sydney. You've got to meet it, where will you spend Eternity?"

Though he had no schooling and could hardly spell his own name, Stace found that not only could he spell Eternity, but that when he wrote it "it came out smoothly in beautiful copperplate print".

Soon the word was mysteriously appearing on pavements throughout Sydney. But who was the culprit? Journalists wrote columns speculating on his identity? Several people claimed they were the author. But he remained an enigma.

Then, on a day in 1956, more than 20 years later, his cover was finally blown when Reverend Lisle M. Thompson, a preacher at the baptist church at which Stace was a cleaner, saw him writing his now famous word on a pavement.
"Are you Mr Eternity?" he asked Stace.
"Guilty, Your Honour", came the reply.

Arthur Stace died on 30 July 1967 at the age of 83. After much haggling within Sydney City Council, a commemorative plaque in wrought aluminium of the copperplate message was placed on public display. And the word was chosen to light up Sydney Harbour Bridge at the start of the new Millennium.

More on Mr Eternity at mreternity.com.