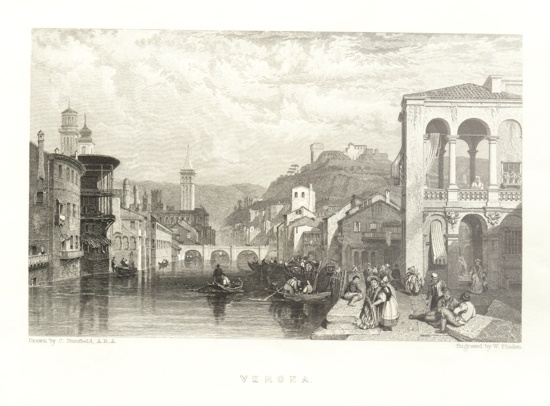 We’ve all met them, on planes or on trains, maybe at train stations or airport departure lounges, bores who insist on telling you every boring detail of their boring lives.


He showed me a photo of his wife who was absolutely stunning.
“She’s beautiful, isn’t she?” he said.
“She is”, I said. “Did you win her in a competition?”


He wasn’t insulted by my sarcastic impertinence, he just laughed again, the kind of laugh that told me that in his mind at least we were now old friends.


“It must have been marvellous”, I said with obvious irony, but he was deficient in that particular commodity and took me at my word and proceeded to show me some photographs on his digital camera of just how marvellous Italy had been.


As it happens Verona is one of those places I have always wanted to visit but never have, though of course I didn‘t tell him that. But I’d heard they have a Shakespeare festival every year in recognition of the plays that the lad set in Verona, including Romeo and Juliet.  It is even possible to see Juliet’s balcony, even though she never existed and Shakespeare doesn’t mention a balcony anywhere in the play. I once saw a production in which she was on a step ladder and her star-crossed teenage beloved was standing on a table.


Apropos of Shakespeare, what kind of a man was he, after all? The professors’ write volumes in their unreadable university jargon trying to address this question when it’s obvious that they no more know a hawk from a handsaw about it than the rest of us.  I once asked the curator of Hall Croft, the house of Shakespeare’s son-in-law in Stratford-upon-Avon, what he thought. “A bit of a boy”, he replied, without hesitation. It sounded good to me.


After we’d looked at his photos for about half an hour my new friend asked me: “So what do you do for a living?”
“Well”, I said, “do you know those official forms you get to fill in with a box on them with the words ‘DO NOT WRITE HERE’? Well my job is to rub candle wax over the box on the grounds that if I can’t write there nobody else can either”.
“Did you need a lot training for the job?” he asked me.
“Not a lot”, I replied.


A short while later the airline decided that we could all have a cup of coffee free, gratis and for nothing, and told us to make our way to the café.
“You coming?” my friend asked me.
“I have a caffeine intolerance”, I lied, and as soon as he had walked away I looked for refuge in another part of the departure lounge where I skulked for a couple of hours behind a party from Glasgow. Then I saw him going through the boarding gate for a flight to God knows where, but not back to his gorgeous wife who he told me he was separated from (did I mention it?), and not where I was going, and that was all that mattered.