Ah, Paris! People quiver at the mere mention of your name. But I'm not one of them... 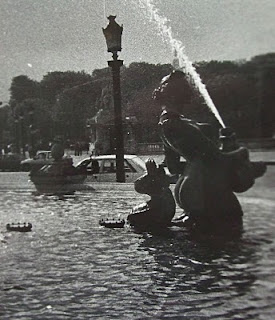 About ten years ago I composed the following poem entitled: A Nice Day.

The sky hangs high
Like a blue thing
With a bright yellow globe
In it.
And it seems to have been
A nice day.
It was a nice day too when I went to Paris in May 2005, the first time that I had visited Paris, or even France, or even the continent, or even anywhere outside the United Kingdom, for 20 years. After arriving at the truly crummy Terminal 3 at Charles de Gaulle Airport, I rather stupidly or inadvisedly or imprecariously took the bus instead of the train to the Gare de l'Est. We set off straight away, got onto a dual carriageway, and I thought that for once I'd made a good call. Wrong. We almost immediately turned off into a business park or industrial estate, stopped and picked up workers, stopped and picked up some more workers, stopped again and picked up yet more, then rejoined the dual carriageway, then left it again for another business park, stopped and picked up more workers, then again, then again, and seemed to repeat this charade endlessly, the bus filling up, then emptying, then filling up again, then emptying again as we very slowly made our way to Paris. We passed through a district which I am still certain had been the epicentre of riots, and finally arrived at the Gare de l'Est. My hotel website had notified me that this was the closest station to the hotel. They obviously hadn't heard of the Gard du Nord, which was, if not closer (there can't have been much in it), certainly a damn sight more convenient. (Assuming you were travelling from the airport, that is, which every guest at the hotel may not have been. Good point.)
The hotel was noisy throughout the night so that got no sleep and the next morning was pretty shattered. Checked out of hotel and was walking up the boulevard towards the Gare du Nord when the le gerant, also called le manager of the hotel came running up behind me.
"Did you pay bill?" he demanded in words to that effect.
"I paid with a voucher when I arrived", I informed him.
"Who did you give it to?" he wanted to know.
"I don't know. The Charlie that was on the desk last night".
He went back and I went forward to the railway station and took a crowded metro to the Gare de Lyon.
Ah, the gare de Lyon! The railway station where you get the train to Lyon. One night, over twenty years earlier, I'd been fairly drunk in a cafe nearby. It must have been 1981, the year of the inauguration of the TGV and the presidential election. Coluche was running for president, and I asked an aging Parisian over a glass of beaujolais (him) and whisky (me) what he thought of Coluche. Con was the word he used to describe him. The geezer had just won some money on the national lottery and had bought a ticket for the TGV, just for the thrill of being one of the first to travel on the new high speed train.
Coluche never got elected, which is a pity, as he seemed to be on the right track with quotes like this:
La moitié des hommes politiques sont bons à rien. Les autres sont prêt à tout.
So anyway on this occasion in 2005, I got out from the railway station and up to the concourse. I wanted to see the boulevard outside the station which I had photographed in 1981 or 1982. And sure enough it was still there! And just like it looked over twenty years earlier - even the pedestrian crossing!! So I took another photo for the record and set out along the boulevard in the direction of the Seine.
I crossed the river in the vicinity of the Gare d'Austerlitz, and then walked along the bank of the river as far as Notre Dame. On a bridge over the Seine a lady tried to con me with the old "Monsieur-is-this-your-ring-I-found-lying-on-the-ground-let-me-put-it-on-you-zut!-it-fits!-you-must-never-take-that-ring-off-it-is-your-lucky-ring-please-can I-have-twenty-euros" routine. I told her to get stuffed and she asked for the ring back.
Passed into the Tuilleries gardens, where the aristos had their heads kindly removed for them by the Revolution. Crossed over to Concorde and past the fountain where Tony "Hasn't it turned out nice again?" Hancock walked in the film The Rebel. Then up the Champs Elysee to the Arc de Triomphe, then vaguely to the right and up that way to the Boulevard des Batignolles and thence the Place de Clichy, the former stomping ground of Louis-Ferdinand Celine. Had a meal in a restaurant at the square and snuck out without leaving a tip.......I had no change, so shoot me!!
Went back to Paris in September 2006, this time staying in a hotel at Porte de Clignancourt. On the Metro from the Gare du Nord one of the local Charlies tried to pick my pocket.......my shoulder bag actually. Last stayed at Clignancourt in '81 or '82, back in the old century, and remember drinking in a bar near the exit to the metro station. I ordered a gin and the barman brought the bottle to the counter. He read from the label: "Lon-don gin. Lon-don? C'est en Ecosse, n'est-ce pas?" No such amusing bavardage this time, just a quick gander at the city from the basilica of the Sacre Coeur, dinner at Pizza Hut, then a ramble around Paris before heading for the airport in the evening or late afternoon. Was it this trip that the plane was several hours late or the previous one? Whatever, it was seriously delayed, and there was high profile security at the airport because of an incident at Heathrow (I think) not long before.
And so ended my excursions to Paris. Haven't been back since, probably never will, and quite frankly, I don't really care. "Paris, some people quiver at the mere mention of your name. Well, let me tell you, buster, j'en suis pas un."
at Thursday, September 30, 2010